Rather than copying the included data and storing it in two places, a transclusion embodies modular design, by allowing it to be stored only once (and perhaps corrected and updated if the link type supported that) and viewed in different contexts.” [1] 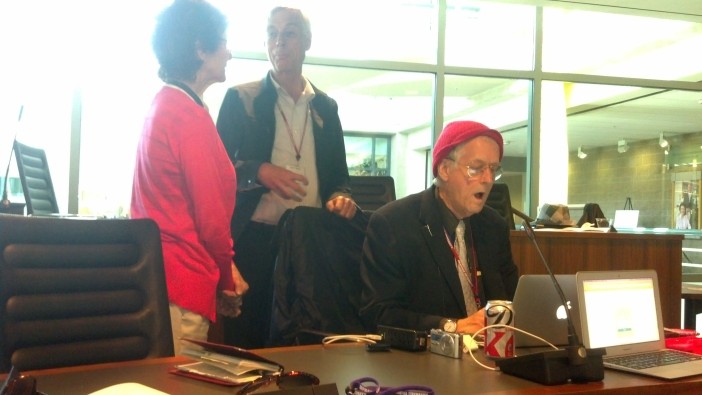 “Project Xanadu, the original hypertext project, is often misunderstood as an attempt to create the World Wide Web.

It has always been much more ambitious, proposing an entire form of literature where links do not break as versions change; where documents may be closely compared side by side and closely annotated; where it is possible to see the origins of every quotation; and in which there is a valid copyright system– a literary, legal and business arrangement– for frictionless, non-negotiated quotation at any time and in any amount.  The Web trivialized this original Xanadu model, vastly but incorrectly simplifying these problems to a world of fragile ever-breaking one-way links, with no recognition of change or copyright, and no support for multiple versions or principled re-use.  Fonts and glitz, rather than content connective structure, prevail.” [3] 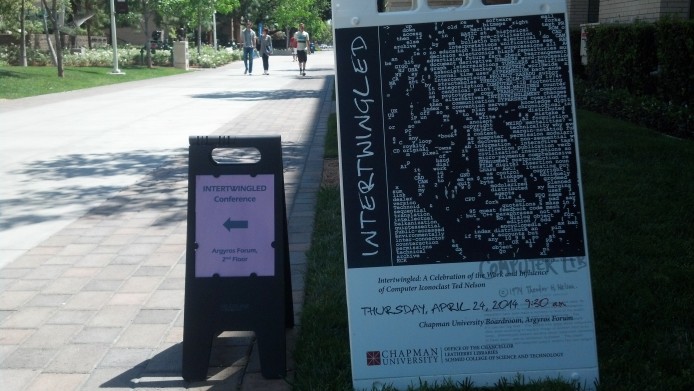 One of the initial links of transclusion surfaced on April 24, 2014 at an event honoring Ted Nelson. The conference was held at Chapman University. Presidential Chair in Information Studies at UCLA, Christine Borgman, was there. Virtual reality pioneer and Author of ‘You Are Not a Gadget’, Jaron Lanier, attended to share his respect for Ted. Steve Wozniak even showed up unexpectedly giving a passionate speech at the end. 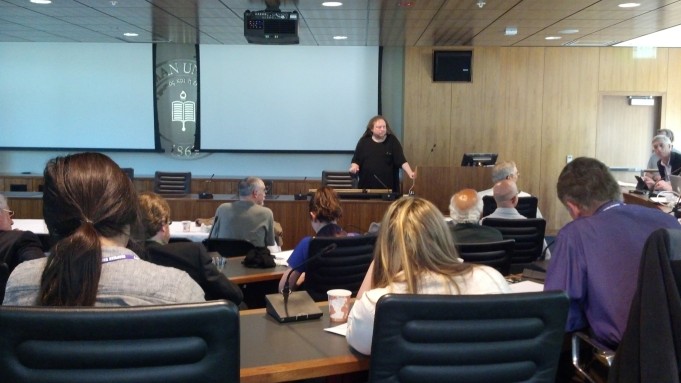 When the final presentation was made, Ted Nelson walked up to the stage to thank his friends for this outpouring of appreciation. He then went on to talk about his life’s experiences. He believes that this place would be a much better world if he succeeded at what he intended to do from an earlier age.

“But I ain’t dead yet!” he says during his speech.

Guided by the inspiration from his 4 main heroes (Walt Disney, Leonardo Da Vinci, Frank Lloyd Wright & Buckminster Fuller), Ted Nelson went out to be independent, able to see what others could not, and creating designs others could not imagine.

To wind up his story, Ted Nelson stated that he was “dealt one of the best hands in history, and misplayed it to the hilt. [He] could have accomplished so much more. [He] was here 1st, and it’s all gone wrong. [He] believes this would be a very different world and better world if [he] had gotten leverage. The world has gone the wrong way.”

Despite all that, Ted has continued on his visions, pursuing the ideas of transclusion in a visible way.

The link for transclusion can be found here. The browser-based Xanadu is working. Nicolas Levin developed it.

Jaron Lanier – American writer, computer scientist, and composer of classical music. A pioneer in the field of virtual reality (a term he is credited with popularizing). Author of ‘You Are Not a Gadget’ and ‘Who owns the future?’

Wendy Hall – Professor of Computer Science and Dean of the Faculty of Physical Science and Engineering at the University of Southampton, UK; Former President of the Association for Computing Machinery; Multimedia and Hypermedia researcher.

Christine Borgman – Presidential Chair in Information Studies at UCLA; Author of Scholarship in the Digital Age.

Belinda Barnet – Lecturer in Media at Swinburne University of Technology, Melbourne; Author of Memory Machines: the Evolution of Hypertext.

Full list of speakers + videos of all the presentations can be found here – https://www.chapman.edu/events/intertwingled/

It’s been a long weekend of drinking. The house where a St. Patty’s day party was held is filled with empty beer cans and cluttered pizza boxes.  Among the trash is a mini Heineken keg that a college student brought over. After searching through the Intructable’s website for something to turn the stainless steel container into, a project by [gilgonza3] was found. The idea is to transform an empty keg into a music player that can be used for the next festivities.

After drinking all the beer, preparations to the keg are made by drilling several holes on the face. This allows the pressure to seep out. Cutting the top off will give enough room to put a car speaker in. Luckily there are pick-your-part car lots all across the country where one can locate the parts needed. Nuts, bolts, and screws can be purchased at a local hardware store. Once put together, this MP3 player can be used just about anywhere.

Instructables for this Project: http://www.instructables.com/id/Mini-Keg-Mp3-Player/

[Nick Zibin] has created a way to track the sun and adjust the blinds depending on light is coming from. His project uses an Arduino Uno, Adafruit motor shield, headers, a digital luminosity sensor, Stepper motor with planetary gear box, a power supply, some 3D printed gear, and a variety of tools. Wiring together the Arduino and Digital Lumonisty Sensor and the motor is relatively straightforward. Latitude, longitude, altitude, and the angle of the window are all used in the code to automatically move the blinds in relation to the sun. [Nick] provides all the instruction details and code sample online.

Uses of this technology have a large potential to reduce energy consumption since it will block out or allow light to come inside a building. Cooling and heating a home becomes a less complicated task once this is installed. Now slap an open-source thermostat on that Home Area Network and watch the savings roll in!!

With the LESS app release imminent, I decided to venture into the core city of Los Angeles to meetup with a phone gap development group. They were presenting how to make mobile websites with Apache Cordova at a co-working place called OPODZ. Located off of 2nd St, finding where to park becomes difficult and settling for an overpriced parking garage may be necessary. If you drive too far away from the nearby shopping center, you will be positioned in a local homeless community where dozens of people live with all their possessions kept loosely within stolen shopping carts and tattered tents. Entering the well-lit and comfortable area inside eases the transition from the hopelessness of the outside to the creative one within.

The demographics of this software group is mostly older. Just about everyone arrives early, with a few exceptions coming in minutes later. The younger section keeps their laptops closed and focuses on the people speaking rather than the program itself. Whispers of cross-platform issues surface as the discussions continue. As time ticks on, it becomes clear that html and javascript is quicker to pick up than native Android or iOS programming which brings out the need for simpler coding environments. The features are limited but the knowledge transfer is faster with solutions like Phone Gap. This allows many wanna-be coders to dip their toes into the mobile developer world sooner than later by creating an app in just a few hours that will work on multiple platforms.

Programming here is relatively quiet. Highspeed WiFi, 24/7 access via key card, mailboxes & storage is all advertised as membership perks of OPODZ.  The kitchen is fully stoked with coffee, tea, and alcohol. Computers are laid across the walls and desks of the upper floor. Ideas and thoughts are drawn in various colors on a black chalkboard. As groups correlate below, the people above work on their own projects. As a mathematician writes algorithms on a nearby whiteboard and others pear into their laptop screens, I glance down at the individuals learning below. Of the 21 devices, 12 were Apple and 9 were Windows. Each personal computer has a new project on it that no has yet seen. Only the future holds the secrets of what will come out of nights like this. Following the events helps to see the beginning stages of work and places like OPODZ tend breed polished products before they hit the market. Go there if you want to relax and work on something new.

Over the past few months, I have been driving across the country from one hackerspace to the next riding the wave of creativity surging from the Maker Movement. So far my journey has taken me into 9 states, 14 cities, and 17 hacker hubs. My goal is to document the emerging trends that are surfacing around the idea of a hackerspace.

Classes are being taught, businesses are created, locks are being picked, and it is all happening in these community-oriented workspaces. Interwoven between all these locations is the potential for expansive peer learning and knowledge sharing. Connecting these spaces across the world will increase the collaboration of the talented individuals that are working there. Taking ‘Hacker Trips’ will help to view the movements as they occur.

Below are a few photos taken at some of the hackerspaces that I have visited during this extended trip. 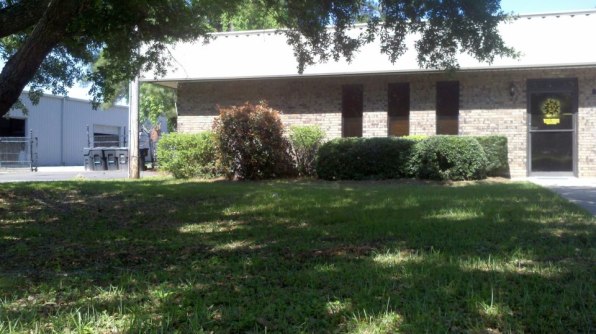 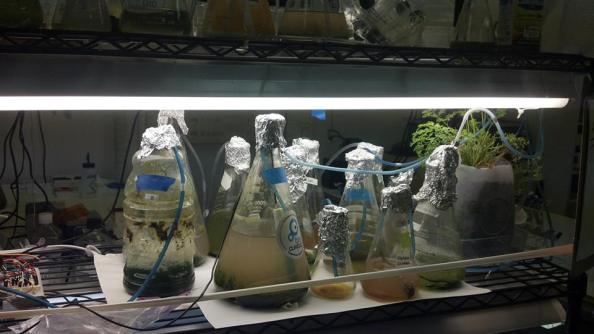 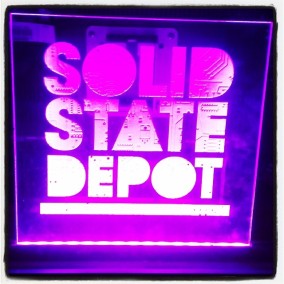